In this last blog post sharing a little of my research into mediaeval women, I will talk briefly about the daily lives of fourteenth century women.

The most striking thing I have learned from reading modern historians’ accounts of the daily life of women in the fourteenth century is how busy most of them must have been!

A wealthy or noble woman might perhaps have led a rather inactive, indeed bored, life, if she was, as Eileen Power described, the romantic lady of chivalric literature (p.31). You can picture her weaving and embroidering, reading perhaps, singing and dancing, playing games such as chess, riding and hawking. Courtly literature often presented noblewomen in this romantic light (Shahar, p.152). 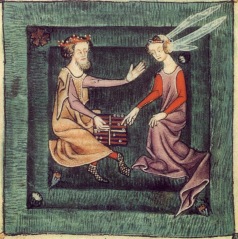 Cropped from a Public Domain image, The Luttrell © The British Library 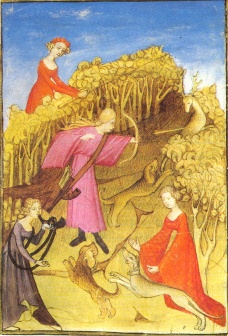 However, a real noblewoman, if she were the chatelaine of a manor, and responsible for running a large household, would be anything but romantic and frivolous. Her role was to provide food and clothes for her family and servants, and provide for her many guests. She must provide bread, ale, butter, cheese, bacon, preserved meat – all produced on the manor premises – as well as purchasing other goods such as wine and spices, candles and household stores (Power, p.41). Many such chatelaines, like the real Margaret Paston, who lived in Norfolk in the fifteenth century, had even more to do when they managed the whole estate in their husband’s absence. Margaret wrote to her husband about negotiations with peasants, about sales, purchases and legal matters, and even about how she repelled an armed attack on the manor (Shahar, p.150).

The daily lives of peasant women were similarly busy. They were also managing a, albeit much smaller, household, and looking after the family vegetable and fruit garden, tending animals – chickens, geese, pigs, sheep, perhaps a cow or two – as well as caring for children, cooking, cleaning, drawing water, tending the fire, making bread and ale, spinning and weaving, perhaps going to market with surplus produce (Shahar, p.240). 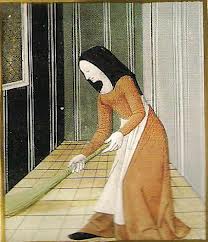 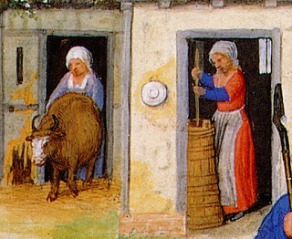 She might well carry out some paid work to supplement the family income. Some might set up in business, as brewers, for example (Leyser, p.146), but it was not very common for a married woman to run a business independent of her husband.

However, women from poorer families with little land might have to work as wage labourers all year round simply to bring in sufficient income (Hanawalt, p.149), and indeed these women might have to perform almost any task, no matter how physical it was (Leyser, p.145). On top of all this women would, if they were villeins, have to provide their share of the manorial work, certainly at harvest time and perhaps throughout the year (Leyser, p.145).

Twenty-first century women might think their multi-tasking lives are tough, but considering the lack of amenities of our fourteenth century sisters, we should wonder how they managed to cope at all with everything they had to do!

One thought on “Mediaeval women (4)”