In this third blog post sharing a little of my research into mediaeval women, I will discuss some of the practical aspects of the lives of women in the fourteenth century.

What women wore and where they lived

Fortune’s Wheel is set in the middle of the fourteenth century. The Luttrell Psalter, produced around 1330-35, perhaps gives us a contemporary view of how people might have looked and dressed, although some feel that the images of peasants in the Psalter are not necessarily a realistic representation. Have a look at Judith Arnopp’s interesting essay at http://www.juditharnopp.com/theluttrellpsalter.htm, in which she presents the Psalter not as an image of reality but as a view of peasant life idealised in order to “glorify the life…of Sir Geoffrey Luttrell…”.

Judith Arnopp feels that the clothing the peasants are shown wearing is “inappropriate both to their station and lifestyle which would have been one of toil”, and it may be that the clothes do look a bit too upmarket, and almost certainly too clean. However, I do think that the illustrations can give us some idea of the differences between the clothes of the peasant woman and those of a ‘lady’.

For example, the two pictures below, from The Luttrell Psalter (owned by The British Library), show two peasant women… 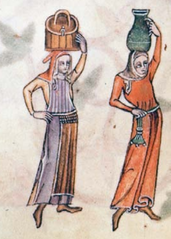 Cropped from a Public Domain image © The British Library

and a couple of wealthy ladies…

All wear a tight-fitting under-dress with a sleeveless or short-sleeved surcoat (over dress) on top. One imagines that, although the style of dress is similar, the fabrics used would have been very different, perhaps coarse wool for the peasants’ dresses and fine wool or silk, perhaps embroidered, for the ladies’. The colours, too, would have been different – usually brown or grey, perhaps, for the peasants, but brighter colours for the ladies (although it is true that one of the peasant women is wearing quite a bright red surcoat, but this may not of course reflect reality). One of the peasants, as a working woman, wears an apron, and on her head she wears an enveloping hood, whereas her friend has a wimple completely covering her hair. The ladies, on the other hand, both have their hair curled and adorned with an elegant headdress. In another picture in the Psalter, a peasant woman is shown carrying a distaff and spindle while she is feeding her hens, an ubiquitous piece of equipment for the busy working woman, who uses every opportunity to multi-task.

You can find out more about the Luttrell Psalter on the British Library’s website, at https://www.bl.uk/the-middle-ages/articles/peasants-and-their-role-in-rural-life.

And there are of course lots of books which help the researcher find out about medieval clothing. One of the many that I have found helpful is Paul B. Newman’s  Daily Life the Middle Ages.

The daily life of a peasant woman was largely focussed on her home and ‘croft’ (the land adjacent to the house). For the lady, too, her life would be centred on her home. So an appreciation of mediaeval houses, how they were arranged and furnished, is important to understanding women’s lives.

A peasant’s croft, perhaps enclosed by a ditch or fence, contained the house, a barn and maybe other outbuildings, and the garden where food would be grown and domestic animals, such as hens or a pig, might be kept. Croft sizes differed greatly. Some were only big enough for a small cottage and the most basic of gardens; others were substantial, with space for a large potager, an orchard and several outbuildings, as well as a decent-sized house.

The houses themselves, of course, varied in size. The smallest cottage of a cottar – the village labouring folk – might be just one room, perhaps fifteen feet (4.5 metres) square. A wealthier peasant might have a ‘long house’, with two or three rooms. Peasant houses were typically built with a timber frame, filled in with wattle and daub, and nearly all roofs were thatched. Floors were usually beaten earth, strewn with straw to catch the various droppings of daily life. The housewife would occasionally sweep out the dirty straw and replace it with fresh. But, as Hanawalt says, “even a fastidious housewife would not clean frequently enough for our sensitive noses, and floors would have seemed rank by our standards” (Hanawalt, p.37).

The fire was situated in the centre of the floor, the smoke escaping through a hole in the roof. The smoke perhaps helped to keep creepy-crawlies in the thatch at bay, but the atmosphere inside the room must have been quite unpleasant, for the fire burned more or less all day long. Presumably you simply got used to it. At night the fire could be capped with a round lid with holes, to keep it under control (Gies, p.91).

Which was just as well, as the family probably slept on the floor around the fire, on straw pallets. Although I believe that some houses had a sort of platform or loft built underneath the roof, accessible by a ladder, which could be used for sleeping (or perhaps storage) (Gies, p.93), and, in larger houses, a separate room might be used as a bedchamber.

Manor houses were of course much larger than the average peasant house, yet might still have a relatively simple layout, with a main hall with the fire in the middle of the floor (though chimneys were beginning to appear), and a few additional service rooms. They might also have a ‘solar’, a second floor accessed by a staircase where the family had their private quarters and sleeping chambers (Gies, p.90), while the servants and retainers still slept on pallets in the main hall.

Many fourteenth century manor houses are still with us, because they were built of stone, and can be seen everywhere in England, if much altered over the ensuing centuries. Most fourteenth century cottages, on the other hand, have not survived, because they were built of wood, wattle and daub, and thatch. However, vernacular buildings of many centuries have been reconstructed at the Weald and Downland Open Air Museum, near Chichester, and are indispensable for the opportunity they provide for getting the feel of where fourteenth (and later) century people lived and worked. The museum is very well worth a visit.

These two illustrations of the reconstruction of a fourteenth century hall house, which can be seen at the museum, are taken from the Weald and Downland Open Air Museum Guidebook (1987 version). 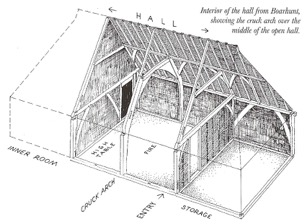 All this is a small part of the research I have undertaken into the practical aspects of the lives of fourteenth century people. There is so much to know! And yet it is all simply background to the story of The Meonbridge Chronicles. I need to know it, so that I can visualise my characters, both as individuals and within their environment. And I do hope that you will be able to visualise them too.